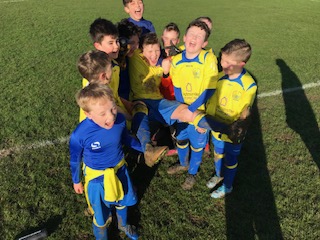 Westminster Homecare’s Under 11 Sponsored Football team had another good performance over the weekend on a very muddy difficult pitch against Claydon.

Oscar set up his buddy Reuben for 1-0

Ruben then set up Jahjah for 2-0

Jahjah set up his strike partner Daniel, & finally Jack somehow passed to Oscar to score a beautiful headed goal to secure the win.

The Defence and Goalkeeper were solid & Midfield worked hard until the final seconds.

The Final Score Stowupland 4 Claydon 2 with Man of the Match nominations going to Jack, Oscar & Josh. But Jack won the man of the match trophy